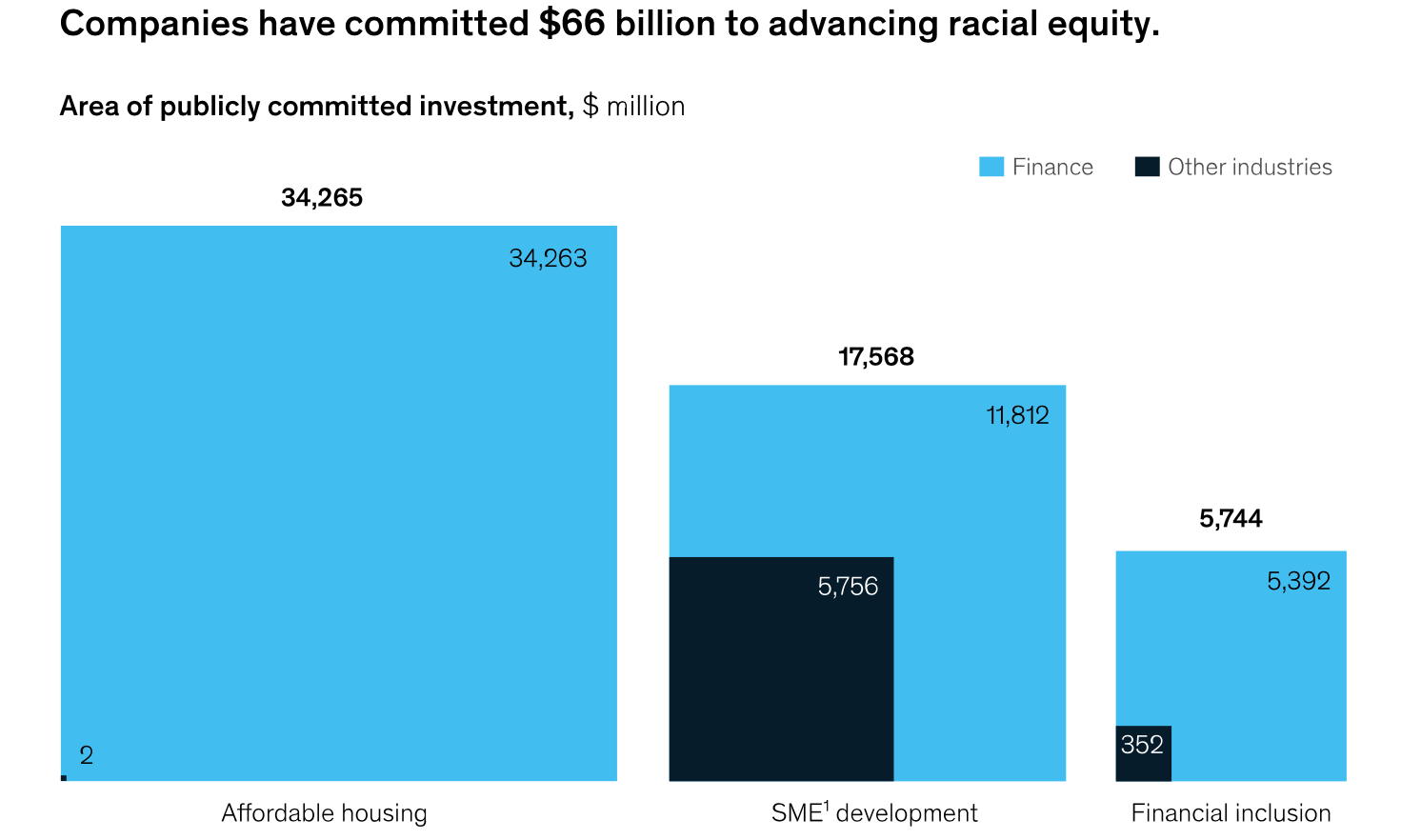 Fortune 1000 companies have committed $66 billion to racial-equity initiatives, according to new research by McKinsey. The companies made their pledges public between George Floyd’s killing in May and the end of October. More than three-quarters of the commitments are aimed at affordable housing and the development of small and medium-size businesses, according to an analysis by the new McKinsey Institute for Black Economic Mobility.

McKinsey's research found that a coalition with five key elements would boost the effectiveness of ongoing racial-equity efforts and help to sustain these efforts beyond the current moment of broad public attention. These elements emerged from wide-ranging conversations with leaders who are on the ground doing this work. These elements include:

1. Unite around one clear mission

Racial inequities exist in nearly every area of society—housing, politics, finance, labor, criminal justice and more—so it can be hard for organizations to successfully focus on a clear mission that will have a profound and lasting impact. The director of impact investing at a foundation working to drive economic inclusion for people of color noted that his biggest challenge is getting grant makers, nonprofits and private-sector companies to stop talking past one another.

Successful coalitions are committed to and united around a clear mission. Freedom to Marry, a campaign that was active in the US between 2001 and 2016, rallied its supporters around a clear goal: winning marriage for same-sex couples. As early as 2001—14 years before marriage equality was achieved in the US—founder Evan Wolfson urged movement leaders, supporters and allies to focus on that goal: “We may leave the room not getting everything we want, but don’t go in bargaining against yourself.”

Wolfson told McKinsey that LGBTQ+ organizations “never 100% agreed on anything.” But as the focused Freedom to Marry campaign moved forward, more and more movement organizations and activists, as well as new supporters and allies, responded to the strategy and embraced the goal of winning marriage. “One of my precepts of activism,” Wolfson explained, is that “you don’t need every; you just need enough—the critical mass of people, supporters, resources, agreement and momentum to deliver on your strategy.”


2. Coordinate and collaborate via a central backbone

In many of McKinsey's conversations, leaders of organizations working toward racial equity called for a better way to coordinate and collaborate. Connie Evans is president and CEO of the Association for Enterprise Opportunity (AEO), a decades-old group that works with more than 1,700 member and partner organizations to provide capital and services to underserved entrepreneurs in the US. When discussing the challenges facing organizations that promote Black economic development, Evans cited a lack of collaboration as a reoccurring theme. “The fragmentation slows things down,” she explained. “What is needed is an agreed-upon direction whereby each organization could realize its role in support of a more aligned strategy.”

Gary Cunningham, president and CEO of Prosperity Now, a nonprofit that advances financial security, stability, and mobility, noted that a lack of national coordination limits the effectiveness of local organizations: “There is no national intermediary to support local ecosystems, so each ecosystem suffers from the same problems as its clients when it comes to capital, technical assistance, talent, staffing and resources.”

The World Economic Forum (WEF), for example, engages businesses, governments and civil-society leaders to address a wide range of industry, regional and systemic issues. The WEF’s industry and regional action groups, COVID Action Platform, and other multistakeholder groups are helping companies and organizations work together to respond to current crises.

The Reboot Representation coalition offers another example of how coalitions can support and amplify the work of individual organizations. Reboot Representation aims to close the race and gender gap for underrepresented women of color in the tech sector. Dwana Franklin-Davis, the coalition’s CEO, told McKinsey that the coalition “offers a safe space where tech companies can learn, grow, and share information about their investments and internal diversity and inclusion initiatives.” She noted that the coalition supports more grantees than any single company could by itself, and that “collective power is a major benefit.” The coalition also promotes accountability, including by asking member companies to collect and share disaggregated data (broken down by both gender and race) on their diversity and inclusion investments and initiatives.

Black-led and Black-focused organizations are disproportionately underfunded. Kimberly Bryant, the founder of Black Girls CODE, an Oakland-based nonprofit working to provide Black girls with opportunities to learn programming and other technology skills, reported that she has to work harder to secure funding than comparable white-led nonprofits: “Even when we’re tapping into the same partner pool, the amount of funding they receive is often significantly higher.” Furthermore, much of Bryant’s funding comes in the form of restricted grants, curbing the organization’s ability to invest in the things Bryant thinks are most needed, like leadership talent and tools to track the impact of its work. “We need women of color in positions of power within funding organizations,” she said.

Coalitions fighting racial inequity must seek to arm themselves with sources of ongoing funding—something far easier said than done. As one stakeholder observed, a long history of bias makes it especially difficult for Black-led organizations to gain the support of philanthropic groups: “Funders say they want to support other communities—but they have consistently funded people who look like them.”

Following Bryant’s lead, stakeholders should continue to push for flexibility to allocate funds for themselves—to decide, for example, what funding goes to innovation and taking risks versus implementation and institution building. Coalitions are often successful when a large group of funders is willing to pool resources and leave allocation decisions to a strong leader. The US Pan Asian American Chamber of Commerce Education Foundation (USPAACC), for example, pools contributions from member businesses, as well as foundations and individual donors, to fund community activities.

Many racial-equity organizations lack data and accountability standards. The majority of stakeholders McKinsey spoke with are unable to link key performance indicators (KPIs) at the organization level to broader economic indicators.

It’s a difficult challenge. Sarah Treuhaft is vice president of research at PolicyLink, a nonprofit working to advance racial and economic equity in the US. She pointed out that while local data are essential, they “can be impossible to get for some important equity indicators such as wealth without individual surveys, which are very resource intensive.”

Successful coalitions have systems in place to collect, analyze and share data on the outputs and outcomes of their initiatives. These systems are based on an agreed-upon set of principles on how impact will be measured and reported, and on how credit for accomplishments will be shared. Racial-equity stakeholders are already taking steps to develop and strengthen such systems. Together with the Equity Research Institute at the University of Southern California, PolicyLink has built an online resource—the National Equity Atlas—to share data with local partners, community leaders, and policy makers.

The global employment nonprofit Generation (which was founded by McKinsey) offers an example of how data can drive progress. Generation gathers a wide range of data and has collected more than seven million data points on its graduates and applicants. The organization has an 86% job-placement rate within three months of program completion, and graduates earn three to four times their previous income. Mona Mourshed, Generation’s CEO, explained: “The data we gather about our learners, our programs and our impact help us adjust course and improve programs continually.”


5. Win and maintain support from a broad set of stakeholders

Even when racial-equity organizations have a proven action plan, they often face institutional barriers—biased policies, structures, forces and practices that limit their growth. As one stakeholder observed, “Even if we get all of the policy and advocacy right, there is an undercurrent of institutional racism at every step of the journey.”
Successful coalitions rely on broader support from—and active engagement by—institutions and individuals beyond those directly affected.

Long-established civil-rights organizations have already worked to build such support, and their example could help guide the outreach efforts of other racial-equity groups. The National Urban League and the National Association for the Advancement of Colored People (NAACP), for example, have driven meaningful progress over the past century through collaboration with national and community leaders, policy makers and corporate partners.
Suggested For You