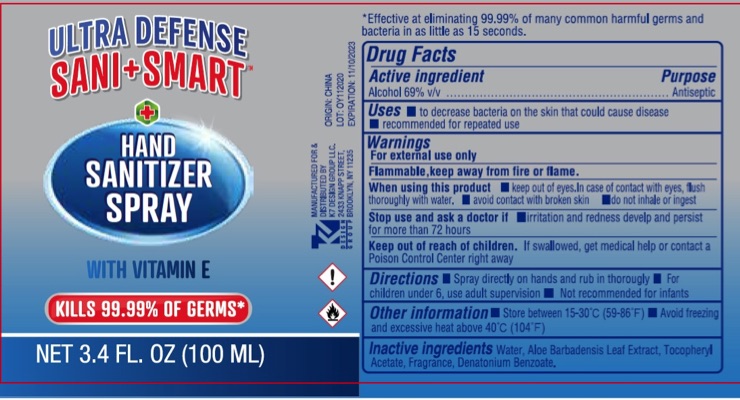 K7 Design Group has filed an $85 million lawsuit on December 2, 2020 against The Kroger Company over Kroger's failure to take delivery of hand sanitizer that Kroger agreed to buy from K7.  K7 is a New York-based, family-owned manufacturer and distributor of consumer products sold under the "Ultra Defense" brand label.

According to K7's Complaint, filed on December 2, 2020 in federal court in Cincinnati, "Because Kroger reneged on a purchase order, K7 has been left with a tremendous quantity of hand sanitizer for which K7 has no other use and which it has been forced to store in its overflowing warehouses.  And, after it had refused to take delivery, Kroger tried to use its immense market power to force K7 to absorb losses that, both in equity and because of K7 and Kroger's contract, should be borne by Kroger," stated Andrew Tomback, Partner, McLaughlin & Stern, LLP, representing K7.

According to K7, Kroger was one retailer that placed a large order, buying millions of units during what was deemed a national shortage.  Kroger placed an order for about $5 million worth of hand sanitizer, which K7 supplied and were sold.  It then quickly made a follow up order for more than $100 million of hand sanitizer.  According to the complaint, after an initial delivery, however, Kroger refused further delivery on its second order because they had over ordered and didn't have the warehouse space.   Kroger has refused to pay for or to accept delivery of the vast majority of the hand sanitizer that K7 had manufactured specifically for Kroger, representing $85 million.

According to K7's complaint "[i]n late March 2020, in response to the global COVID-19 pandemic, K7 offered to sell a large quantity of hand sanitizer to Kroger on an expedited basis.  The two companies struck a deal for the sale of several million units of hand sanitizer, to be shipped as quickly as possible.  This production run and ensuing shipment essentially concluded in June 2020 without complaint from Kroger."  In May 2020, Kroger placed a much larger order for tens of millions of units to "replenish" its initial March 2020 purchase from K7 and working with its overseas manufacturers, K7 immediately began producing to fill Kroger's order.  By the summer of 2020, however, Kroger had fallen behind in taking delivery of the goods it ordered and since then has only fallen further and further behind, leaving K7 with no choice but to file suit against Kroger for the $85 million Kroger owes to K7 on the product Kroger so desperately wanted and purchased in May 2020.