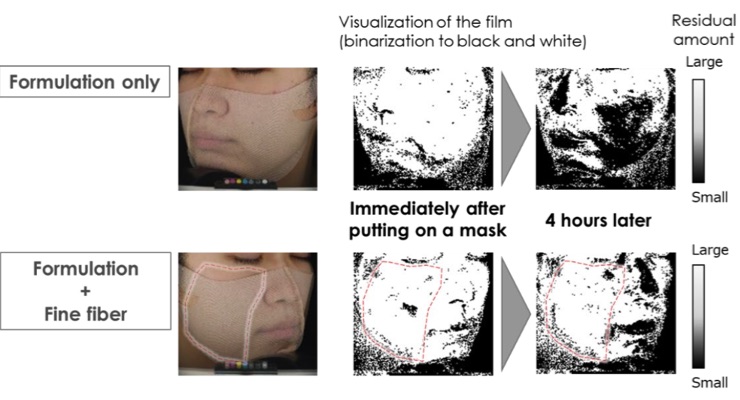 Fiber—it's not just for breakfast anymore. The Skin Care Research Laboratory, Makeup Research Laboratory and Analytical Science Laboratory of Kao Corporation analyzed the skin protection functions of the ultra-thin membrane formed by its Fine Fiber Technology, a technology to form a layered, ultra-thin membrane which feels light, soft and natural on the skin surface by directly spraying superfine fibers with submicron diameter, according to Kao.

Through this study, Kao’s researchers have found that the fine fiber membrane keeps pollen and other atmospheric pollutants (PM2.5) from coming into contact with the skin while also adsorbing the sebum secreted from skin. The dirt and excessive sebum adhering to the membrane can then be removed by simply peeling off the membrane.

“Although we had known that the membrane formed with our Fine Fiber Technology has a dense structure with a high capillary force, we had not been able to effectively convey its benefits to our customers," explained Senior Researcher Masayuki Uchiyama, Laboratory 3, Skin Care Research Laboratory, Kao Corporation. "Once we reconsidered the possible roles of the membrane, we realized that it has a function to protect the skin itself."

Kao researchers note that skin is constantly affected by the environment and external factors. Awareness of air pollution has increased not only in Japan but also in China, Europe and America in recent years. Furthermore, many have complained that their skin condition has worsened after wearing masks, which has become the norm for many people around the world today. Fine Fiber Technology, which Kao announced in 2018, involves forming an ultra-thin membrane of interfolded superfine fibers of submicron diameter on the skin. Kao has examined the functionality of this ultra-thin membrane and elucidated various functions, including the function of keeping the skin in good condition by controlling the transpiration of moisture from the skin surface when the skin is covered with the fine fiber membrane, and the function of smoothing skin roughness and covering spots to obtain a beautiful finish by applying base makeup cosmetics on the fine fiber membrane. This study examined the structure of the fine fiber membrane that protects the skin.

The fine fiber membrane has a three-dimensional structure in which superfine fibers are interfolded, and contains innumerable minute gaps. In this study, Kao measured the sizes (pore diameter distribution) of these minute gaps using a porosimeter. The results confirmed that the pore diameter of the fine fiber membrane was approximately 1.8 microns, and that this size, which was compared with the sizes of atmospheric pollutants (dirt), could capture PM2.5.

Kao’s researchers confirmed the protection effects from physical stimulations (such as abrasion and chafing) when a fine fiber membrane was formed on the skin. Five men and women in their 20s to 30s as test participants were asked to wear a face mask for approximately 4 hours after a formulation which remains on the skin for a certain period was applied and a fine fiber membrane was formed on only one cheek. The residual state of the formulation and the fine fiber membrane on the skin was compared between the two cheeks immediately after putting on a mask and after wearing the mask for 4 hours, and the degree of abrasion was visualized and quantified.

Kao’s past studies have revealed that a high capillary force acts on the fine fiber membrane due to its porous structure. This led to the expectation that sebum, which is secreted from the skin, may be adsorbed on the inner surface of the membrane, and so tests were conducted.

A fine fiber membrane was formed on one cheek of 29 women in their 20s to 50s, and the sebum was collected from the skin of both cheeks by wiping with a cigarette paper after 4 hours to quantify the amount of sebum by liquid chromatography-mass spectrometry (LC/MS). The results showed that more sebum remained on the cheek to which the fine fiber was not applied than on the cheek to which it was applied. LC/MS quantification of the fine fiber membrane that was removed from the skin also showed that approximately 70% of the secreted sebum had transferred to the membrane.

This study revealed that the fine fiber membrane has functions to prevent atmospheric pollutants (dirt) such as pollen, dust and PM2.5 from directly adhering to the skin, and to protect the skin from physical stimulations such as chafing, as well as a function to capture excess sebum within the membrane at the same time. The dirt and excess sebum adhering to the membrane can be removed easily by peeling off the membrane.

"We believe that the fine fiber membrane can absorb sebum from the skin and protect the body from the external environment, while also retaining moisture in the skin," explained Uchiyama. "Even though there have been other polymeric coating products in the past, they mostly had thick membranes that resulted in a unnatural appearance, and none of them had the above skin functions. We believe this technology will lead to the development of new types of products that span multiple categories such as skin care and makeup.”

Kao Corporation hopes to apply these findings of itsFine Fiber Technology to areas of high interest such as air pollution, and to propose new applications.
Related Searches
Related Knowledge Center
Suggested For You