Acquisitions continue to create a buzz in supplier circles. 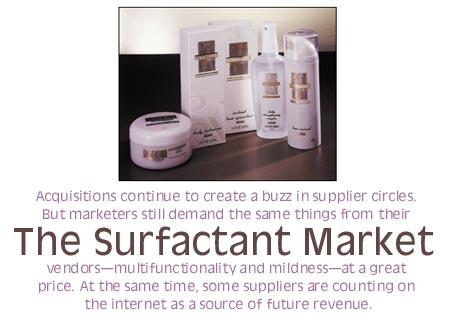 Concern over rising prices isn’t only the concern of Federal Reserve Chairman Alan Green- span. Some surfactant suppliers say they felt the squeeze too as oil prices surged during the first half of 2000.

“Overall sales in 2000 are ahead of where they were last year,” noted Craig Aiken of Uniqema. “The major difference in 2000 is a significant drop in margins for the entire industry versus 1999.”

Mr. Aiken told Happi that costs are up across the board, but they have been felt particularly in the case of petroleum-based feedstocks. Those price pressures, he said, have necessitated price increases on selected products.

Acquisitions during the past several years have also reshaped the surfactant landscape in the household and personal products sector. Most recently, Rhodia acquired Albright & Wilson, but the deal-making is far from over. Dow Chemical’s acquisition of Union Carbide is expected to be completed very shortly and RWE is expected to sell Condea in coming months.

Dow has been very aggressive in its acquisition during the past few years. Besides the pending Union Carbide acquisition, Dow has already purchased Hampshire Chemical and a number of other chemical companies. Dow’s customers are already enjoying the benefits of the acquisition, according to Art Pavlidis of Hampshire.

“We have the ability to leverage the global marketing, sales and technical resources of Dow,” he noted. “Being able to capitalize on these resources is key to our ability to expand our surfactant sales worldwide.”

According to Mr. Pavlidis, as a subsidiary of Dow, Hampshire’s customers gain a reliable, low-cost supplier of specialty surfactants with powerful resources behind it.

As one might expect, however, other surfactant suppliers insist there is still a great need for smaller vendors. “The ‘mega-surfactant’ companies resulting from mergers and acquisitions are another source of growth for us, as product lines not representing millions of pounds a year are being rationalized,” said Chuck Utberg, Burlington Chemical Co. “These actions result in opportunities for a smaller manufacturer such as BCC.”

“A good example of this is the use of ingredients in several major shampoo brands, such as ceramides, that were previously used exclusively in skin care products,” noted Mr. Hessel. “The addition of ‘bio-actives’ presents challenges in formulating these ingredients into shampoo and conditioner formulations and may require novel surfactant systems or delivery vehicles.”

Finished product trends continue to move toward natural products, noted Kathy Felson of Maybrook, Inc. “Our protein-derived surfactants continue to benefit from this trend, especially since they are mild.”

Mr. Pavlidis pointed out that in the highly-competitive personal care market, there is a growing demand to distinguish one’s products from the competition. As a result, formulators are turning to specialty surfactants that will impart special properties to formulations.

According to Mr. Pavlidis, Hampshire’s entire line of anionic surfactants lather extremely well in the presence of hardness ions and sebum.

Formulators look at every ingredient in the formulation with an eye toward delivering the mildest product possible, particularly with surfactants, whether used for cleansing or foaming effects or even when they are used to stabilize emulsions, said Mr. Aiken. “At Uniqema, we offer a wide range of very mild surfactants that meet this need such as our new Arlacel P135. This new polymeric emulsifier has the unique ability to disperse solids, including pigments in elegant, liquid water-in-oil lotions.”

According to Mr. Aiken, this characteristic is particularly useful in the formulation of popular silicone emulsions and high performance color cosmetics or sun care products.


Trends in HI&I
Mildness is even a concern in the HI&I segment. Elliot Cohen, DeForest Enterprises, insisted there is a strong emphasis on sanitizing products as well as environmentally-safe products. “Europe is removing all phenolic surfactants from finished products. This is affecting U.S. companies, relating to global sales,” he noted.

New product launches, such as disinfectant towelettes in the consumer market, and continued government attention in the area of food safety keeps sales brisk for cationic surfactants which are also used as antimicrobial actives, according to Terri Romeo of Lonzagroup. “Consumer demand for antimicrobial/antibacterial products is driving this segment of the market ahead of surfactant de-mand in other categories,” she noted.

Sybron Chem- icals, Salem, VA, is developing new technology for cleaning and odor control. Sybron’s Lois Davis ex- plained that biological components add the capability to eliminate the organics that penetrate surface pores in tile, wood, concrete and other surfaces to deep clean and eliminate odors at their source.

“We’re introducing a highly active odor control product that combines chemical activity to provide immediate response and microbial technology to provide long-lasting effects. It is safe and very effective,” said Ms. Davis. “In addition, several new products are scheduled to be introduced by year-end that will provide additional capabilities for floor cleaning and drainline maintenance.”
There is a clear customer preference for surfactants that deliver both performance and value, said Fabio Venturelli of The Dow Chemical Company. “This is particularly true in the household and I&I cleaning industries as formulators strive to differentiate their products in increasingly competitive markets.”

According to Mr. Venturelli, executives at major global companies consistently turn to Dow for its Dowfax anionic surfactants when their formulations require specific attributes such as exceptional rinsability, bleach compatibility, positive hard water performance, hydrotroping and stability in acids, alkalis and electrolytes.

New Moves for Many
Hickson DanChem, Danville, VA, entered the surfactant market last year through the licensing of Shell’s oxidation process to manufacture Neodox alcohol ethoxycarboxylates. According to the company’s Rae Johnson, the first half of 2000 met with expectations.

“Raw material increases will continue to pressure margins for the remainder of the year,” he noted. “However, we feel that our volume and presence in this market will grow due to our increased emphasis on it.”

Last year, Cognis was carved out of Henkel and Mr. Hessel noted this formal separation of the chemicals business has helped eliminate a perceived competitive relationship with Cognis’ customers. “This has allowed Cognis to develop a closer working relationship with our customers,” said Mr. Hessel.

He also pointed out that Cognis’ acquisition of Laboratoires Serobio-logiques, its exclusive marketing agreement with AHCare and the Primacare encapsulate joint venture will benefit finished product producers.

“While these additions are not in the surfactant category, they do have an impact on our surfactant customers,” insisted Mr. Hessel. “Our ability to develop formulations with the entire product portfolio provides a shorter time-to-market, since we have the experience to formulate these ingredients into atypical formulations.”

Uniqema executives are focusing their attention on the industry trend toward globalization—both in the products the company produces and the relationships it has with suppliers. “Globalization is a big challenge as the overall economy is becoming increasingly global,” said Mr. Aiken. “The successful suppliers will deliver innovation, offer a slick supply chain that efficiently delivers in every region and products that perform consistently.”

Barbara Woldin noted that Croda International Plc has been operating in a growth environment and has been “globalizing” its corporate image, including the adoption of a new logo. “As an international company, Croda is positioning itself as a global supplier at the forefront of science and technology and to this end, will be standardizing much of its operations around the world to meet the increasing needs of its customers who market their products globally,” noted Ms. Woldin.

She pointed out that Croda has expanded worldwide, has invested in a large-scale building program and has undergone major capital improvements. The new surfactant facility at Rawcliffe Bridge, UK, gives Croda one of the largest taurate/sarcosinate plants in the world which produce the Adinol and Crodasinic product ranges. Croda has also opened two twin-unit ester/ethoxylation plants at the Rawcliffe site and at the Croda Singapore plant on Jurong Island, enabling the latter to pump rather than truck in ethylene and propylene oxide.

DeForest Enterprises will introduce eight surfactants to help customers develop unique, cost-effective finished products that are environmentally acceptable, according to Elliot Cohen. “We have renewed and expanded our strategic business alliance with Kao Specialties Americas, which will increase our domestic capacity and allow us to manufacture products on a global basis,” he noted. “During the second half of 2000 we expect to increase our marketing capabilities worldwide.”

Caught in the Net
Companies may be taking different approaches when it comes to growth initiatives—some introduce new products, a few expand plant capacities and still others expand their sales and distribution networks. But nearly every supplier agreed that the internet will play an increasingly important role in reaching customers.

In fact, just last month some of the biggest chemical suppliers in the world, including BASF, Bayer, Dow, DuPont, Rhodia, Rohm and Haas and Van Waters & Rogers, announced they will create a new business-to-business e-commerce company. The operation will be established next month and should begin serving customers by the end of the year. Designed to be open and inclusive, this neutral marketplace will include the supplier-to-supplier, supplier-to-customer and distributor markets with important consideration for end-use markets. Unlike other internet chemical market exchanges, it will concentrate primarily on contractual sales that represent most of the worldwide chemical market.

Other companies too, are eager to exploit e-commerce opportunities. “E-commerce has great potential in the surfactant industry for taking costs out of the supply chain and delivering greater value to our customers,” said Mr. Hessel of Cognis. His company has been active in developing an e-commerce strategy and exploiting the opportunities the new technology presents.

“A strong e-commerce capability can provide a competitive advantage in the current and future business environment and Cognis is investing to maintain our leading position,” said Mr. Hessel.

Ms. Woldin of Croda agreed that e-commerce may become significant in the near future, but noted that the industry is more likely to see substantial buying online in the area of commodity items. “Where online business is apt to become more widespread is in the area of sampling. That holds true for commodity and specialty surfactants alike,” observed Ms. Woldin.

Maureen Matson of Lonzagroup told Happi that the short-term impact on the surfactant market and other specialty markets will be minimal. Rather than focusing on buying and selling online, Lonzagroup executives view the internet and e-business as a means of providing superior customer service. “We are looking to improve the flow of information to and from our customers.”

As competition in the personal care, household and I&I markets continues to escalate, surfactant suppliers rely on the internet, as well as traditional new product introductions and capacity expansions to meet the growing demands of the market.