With a focus on Hispanics and natural ingredients, ethnic hair care marketers hope to revive sales. 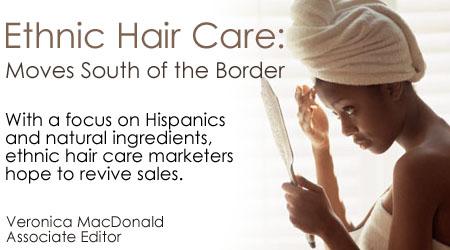 As any geneticist can tell you, human beings are more than 99.9% alike, but in that fraction of a percent, vast differences can be found between ethnic groups, such as susceptibility to certain diseases, skin color and hair texture. And, as a result of these differences, personal care companies have created a thriving ethnic hair care market. In fact, Procter & Gamble entered this market this year with Pantene Relaxed & Natural and the acquisition of Wella, which owns Johnson Products. Women of African descent have different hair care needs from the rest of the population with easily damaged, curly and frizzy hair.

Sales, however, in the $166 million African-American hair care market fell 5.6% for the year ended Feb. 2, according to Information Resources Inc. (IRI), Chicago, excluding Wal-Mart results. Some companies blame the slowing economy. Others are focusing on a group of women who have similar hair issues—Hispanic women.

The U.S. Hispanic population in particular has grown 57% since 1990, according to 2000 Census figures. Multinationals are no longer turning a blind eye to these consumers. Not only have the number of Hispanic television channels increased, but ads on mainstream TV have as well. In fact, P&G launched a Spanish-language TV ad for Crest during the Grammy Awards in February.

“When the census came out in 2001, all of a sudden corporate America realized there are Hispanics in America,” explained Ira Mayer, publisher, EPM Communications, New York, NY. “It was no surprise to people who have looked at the demographics; it didn’t come out of nowhere. But the Census reinforced and gave credibility to this critical mass audience.” Adding fuel to the fire, the Census also revealed that nearly 7 million people in the U.S. are at least two races, making the possible ethnic hair care audience that much wider.

A Spanish Solution
Revlon Realistic, a Colomer USA brand that had relaxer sales of $4.2 million for the year ended Feb.
2 according to IRI, re-staged its no-lye Relaxer Systems. Two are formulated for African-American women and now there are two for Hispanic and multicultural women. Executives said women of Hispanic heritage prefer relaxers that leave hair straight, yet full of body. The Hispanic population’s buying power in the U.S. is estimated at $561 billion, Multicultural Marketing Resources said.

“We have proven research that Hispanic hair is different; it is stronger and coarser and has not gone through as much chemical treatment as African-American hair,” said Pumla Cossie, marketing director, multicultural division, Colomer USA. “Most Hispanic consumers were not happy with mainstream relaxers. Nothing exactly suited their hair.” Ms. Cossie added this complaint was especially prominent in Caribbean salons.

All of the relaxers contain a treatment ampoule that reconstructs the hair shaft after the treatment, which only lasts 20-25 minutes. The formulas leave hair silky and shiny and correct porosity. The relaxer types include Regular for fine and medium-textured Hispanic hair and Super for coarse/abundant Hispanic hair, and Regular and Super for African-American hair. The packages have Hispanic and African-American models to facilitate shopping. They retail for $4.50-4.99.

L’Oréal Institute for Ethnic Hair and Skin Research scientists said African-American hair is tightly twisted with a large degree of curl. Brittleness is largely caused by longitudinal splitting and cross-sectional variability along the hair fiber. Hair loss is not uncommon, especially where rollers, ponytail holders, traction styles and braids are common.

The two general ways African-Americans can wear their hair is either relaxed (straight) or natural (curly). Relaxed hair, because it has been exposed to chemicals, is much more compromised. Therefore hair maintenance is vital, even during the relaxing process.

Soft Sheen-Carson’s Optimum Care, a relaxer and hair care maintenance line, was recently re-staged with a new package and position. The line’s new advanced anti-breakage strength system with lysine technology was designed to condition and protect hair strength during each stage of the relaxing process. Boxer Laila Ali, daughter of boxing legend Muhammad Ali, is the new spokesperson for Optimum Care.

“As a part of L’Oréal, we have leveraged technology and innovation to offer more to consumers,” said Shawn Tollerson, senior vice president of marketing, Soft Sheen-Carson. “We continue to hear from African-Americans that their hair tends to be dry due to the structure of hair and its curly nature. Maintaining the health of hair is a high concern, and Optimum Care keeps hair strong and healthy.”

Keys to Repairing Damaged Locks
As previously mentioned, multinational Procter & Gamble entered the ethnic hair care market last month with the launch of the Pantene Pro-V Relaxed & Natural hair care collection and the acquisition of Wella. Executives said most women of color said their hair is hard to style when it is too dry, and 65% said their hair is not as healthy as they would like it to be. High percentages of African-American women have also experienced nearly every hair problem imaginable, such as dry hair, dry scalp, lack of shine, broken hair and itchy scalp. Pantene Pro-V Relaxed & Natural keep all types of ethnic hair strong and healthy. P&G executives said 85% of African-American women agreed it was important that products are designed for their hair. The pro-vitamin formulation contains essential oils and moisturizing conditioners such as jojoba seed and coconut oils to reduce hair breakage and tame frizz.

She’s Got the Look
Keeping hair healthy is only half the battle; styling is also a major concern. For women who like versatility in their hairdos, Soft Sheen-Carson launched Wave Nouveau Coiffure, a collection of permanent wave products sold to professional stylists. They contain Trifusion technology, a combination of conditioners, moisturizers and vitamins.

“We keep our pulse on what is happening in salons,” Ms. Tollerson said. “Permanent waving is the future. This fusion technology allows consumers to wear hear straight or curly, or what we call ‘360°’ hair—any way you want to wear it.”

Ms. Tollerson added that the technology also does not straighten hair to the degree of normal relaxers.

Some executives insist African-American men are no longer shaving their heads and are sporting natural styles such as braids, twists and dredlocks.

“There has been a shift in styles, but the shift has been more dramatic on the male side—men are going for longer hair such as cornrows and braids,” noted Shirley Lawson, marketing director, Johnson Products, Wella.

The Natural Choice
The ethnic market has also adopted a prevalent trend in the personal care market—natural ingredients. Though naturals are seen as a healthy choice, they also provide a link to the past for many ethnic consumers.

J. Strickland & Company, the No. 6 vendor in the African-American hair dressing market with sales of $2.3 million, according to IRI, is introducing several new items under its sulphur8 line. Citing the popularity of braids, executives said the company will introduce the sulphur8 Twist and Lock braid gel, as well as Braid butter and Braid oil. For exposed scalp areas, the company now offers a Medicated Scalp solution to help control dandruff and itchy scalp and add sheen to braids. J. Strickland executives said they have increased the amount of tea tree oil and other natural ingredients in these products.

Luster Products, the leader in the African-American hairdressing category with annual sales of $4.4 million for the year ended Feb. 2, recently launched Earth Secrets, a line of products designed to make the hair manageable, healthy and shiny using natural herbs and vitamins. Executives said the products restore natural oil and moisture to hair and can be used on relaxed, pressed, natural, waved, braided and color-treated hair.

To help revitalize the African Pride brand, later this month Colomer USA will introduce Earth Blends, a collection of products with organic ingredients. “Sales in the ethnic hair care market were down 4% in the past year,” Colomer’s Ms. Cossie noted. “Despite the decline, natural products have shown good growth. We are capitalizing on this trend, but offering complexes as well such as carrot and vitamin E.”

For girls, African Pride reformulated its Dream Kids Conditioning shampoo and repackaged it in a stand-alone 8-oz. bottle. Previously sold in sets, the shampoo contains a blend of herbs and oils to cleanse, detangle and condition hair to boost its health, body and strength.

“Because African-American hair is curly, moisture doesn’t have the same opportunity to go down the hair shaft,” insisted Soft Sheen-Carson’s Ms. Tollerson. “Women with the natural look still need moisturizing and conditioning products.”

“The new items share the same color scheme, but due to the shapes of the packages there were some modifications,” said Johnson Products’ Ms. Lawson. “However, you can definitely see the products are part of the same family.”

“Consumers are interested in styling and moisturizing products in particular,” noted Ms. Lawson. “It is the same across the board for natural and relaxed hairstyles. Consumers are looking for products that allow styling flexibility, convenience and consistent performance.”

Makeover Mavericks
With several new entries into the ethnic hair care market, the competition has become fierce. This has led several category leaders to repackage their lines.

J.M. Products’ Isoplus packaging now has a modern look. The graphics were updated against a solid color background and the Isoplus lettering is now vertical instead of horizontal, providing more room for the product story. The Isoplus logo is also smaller and set in a band around the shoulders of the bottles and cans. Executives said the look is designed to appeal to a wider and younger consumer audience.

As mentioned before, Soft Sheen-Carson revamped it Optimum Care line. Executives said they have seen increased sales and market share since the restage. Carton manufacturer Rex Corporation, Jacksonville, FL, is the face behind many of these changes. Rex executives said attributes that grab the attention of African-American or Hispanic women are ethnic models, background colors and words used to describe dye colors. “The statement ‘lye-free,’ for relaxers, is something health conscious consumers are looking for,” noted Rex marketing manager Michael Little. In addition, some products focus on heritage using African art and designs, which is something most African-American consumers relate to, if not specifically seek out.

“African-American and Hispanic products, generally speaking, are more involved than just putting a face on a package,” said EPM Communications’ Mr. Mayer. “Consumers very much want to feel that the companies selling the goods have a base in the community, diverse workforces, support activities in the community and understand their particular needs.”

Bringing Unity to the Market
The ethnic hair care market consists of a diverse range of companies, from multinationals to start-ups. But they all share one thing in common—a dire need for more research. The technology available is splintered, and often exclusive to select companies. “Ethnic hair care research is not documented properly and the information is scattered and proprietary,” explained consultant Max Panitch of Max Panitch Inc., Skokie, IL.

L’Oréal’s Institute for Ethnic Hair and Skin Research helped to advance research with its international ethnic hair and skin symposium in 2001. The second bi-annual symposium, “Ethnic hair and skin: new directions in research,” will be held Sept. 20 and 21 in Chicago, IL.

L’Oréal’s Soft Sheen division has fared well in the market; in fact combined sales of Soft Sheen and Carson products lead the relaxers category, according to IRI. Bringing new concepts to market continues to drive the division. During the second half of 2003, Soft Sheen-Carson plans to roll out new coloring and styling products. But, executives insisted, there are no blueprints in this burgeoning market.

“What happens next in the industry is what we create,” Soft Sheen-Carson’s Ms. Tollerson asserted. That is true for every ethnic company, big and small.

For a list of new ingredients for ethnic hair care produts, be sure to read the print version of Happi.