Where is the Global Economy Headed? 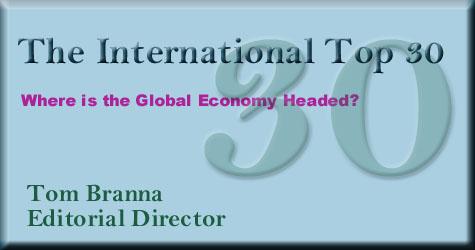 Just as the U.S. economy shows signs of life after more than a year of economic uncertainty, the rest of the world has become either mired in turmoil or appears headed for a rude awakening after several years of growth. Consider Asia, for example. The financial crisis that rocked Japan back in 1989 is still reverberating in that country. Japanese companies are developing a wide range of programs and cost-cutting measures to boost results in their own flagging economies while improving sales outside Japan. So far, they've just been tinkering with their outdated corporate structures. After more than a decade of poor results, a major overhaul may be necessary.

In Europe, the rapid decline of the euro has spooked many economic observers. Since its debut less than two years ago, the euro, which had been heralded as an alternative currency instrument to the U.S. dollar, has devalued more than 10%. Unless European leaders decide to step in and correct the currency weakness, Europe could be hit with a hefty dose of inflation, just at a time when the floundering U.S. economy starts to pull out of its quasi-recession.

Finally, the picture in Latin America remains unsettled at best. Economic reform continues at a snail's pace, local currencies are still battered by inflation and most countries in the region are ill-prepared to compete on a global scale. Thus, the question begs, what kind of shape will the world economy be in by the end of the year? If results from the leading household and personal products companies listed in The International Top 30 are any indication, the global economy could be in for a rough road ahead. Whether it's Europe, Asia-Pacific or South America, there are reasons for concern.

As the storm clouds gain strength in other parts of the world, the sun must start shining again on the U.S. economy to avoid an economic slowdown on a global scale. Fed chairman Alan Greenspan insists the U.S. economy will pick up by the end of 2001, but companies continued to post weak earning results for the second quarter and financial observers don't expect a turnaround anytime soon.

What's the situation like for international manufacturers of household and personal products? Read The International Top 30 to find out. This group is led, once again, by Unilever. In fact, the Anglo-Dutch consumer goods giant's household and personal product sales are nearly double that of L'Oréal, the No. 2 company on our list. Other firms ranked in the top 10 include Henkel, Kao, Shiseido, Reckitt Benckiser, Wella, Beiersdorf, Lion and Kanebo. As previously noted, many Asian firms are grappling with reform at the same time European companies are enjoying robust sales. Will the tables be turned when Happi reports on The International Top 30 a year from now? Will the economic malaise that has affected the U.S. for the past year spread to other parts of the world? Or will the global economy regather itself and start building the momentum necessary to sustain long-term growth? Only time will tell.

Before you start reading The International Top 30, here's a quick note about exchange rates. To rank the companies by sales, we converted each firm's sales from their own currencies to U.S. dollars based on the exchange rate on the final day of the firm's fiscal year.
Related Searches