BASF researchers provide insight on selecting the right raw materials and creating dispersions, as well as offer some troubleshooting tips. 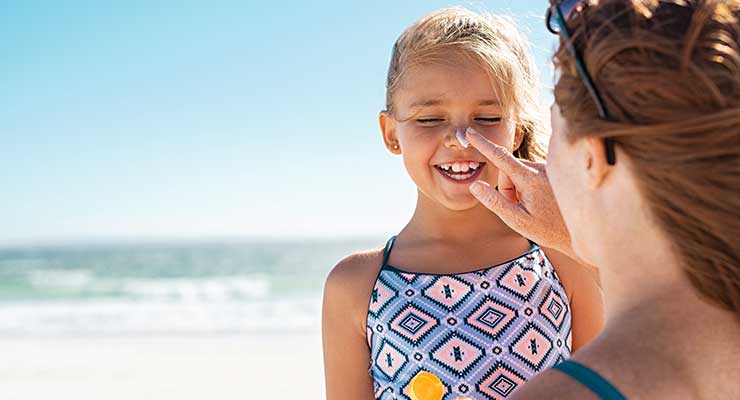 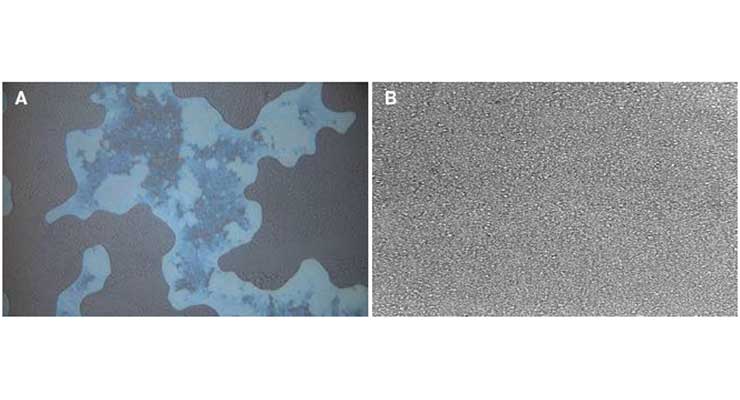 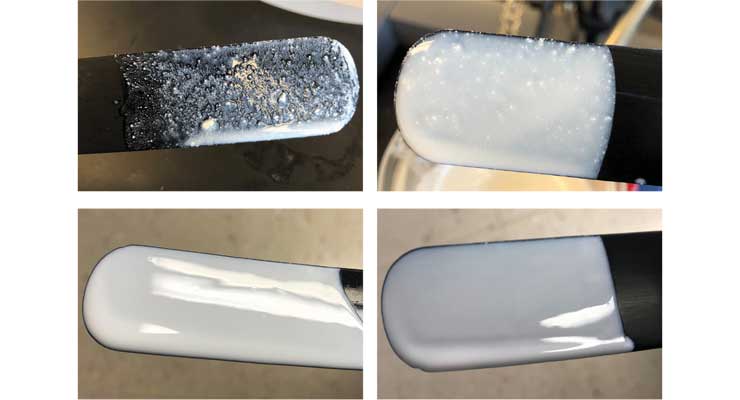 The photos above demonstrate how the dispersion may look during each step of the process.

Formulators’ interest in using zinc oxide in sunscreen formulations is on the rise in North America, driven by the current regulatory climate surrounding organic UV filters in the US. This driver, coupled with increasing consumer demand for information on the safety and purpose of the ingredients in the products they purchase, has given rise to a new market segment for safe formulations that don’t compromise efficacy. Zinc oxide is long recognized by consumers as a safe and effective ingredient, especially as a mineral UV filter. This confluence of factors makes zinc oxide the ideal UV filter for today’s sun care market.

Zinc oxide formulations are growing in popularity and zinc oxide works well in trendy, on-the-go formats such as sticks. Depending on the specific zinc oxide, it may support “free-from” and “clean” claims. If formulated properly, it is also effective in water-resistant formulations.

Zinc oxide is a broad-spectrum UV filter that protects the skin from UVB and UVA rays. Additionally, it has longer wavelength UVA coverage, which contributes to its popularity. It is tentatively categorized as a Category 1 UV filter (safe and effective) in FDA’s sunscreen monograph. To maximize zinc oxide’s performance, proper formulation techniques must be followed.

Dispersions: A proper dispersion is essential for optimal performance of a sunscreen product. It provides better UV protection and improves stability, and reduced whitening improves cosmetic appeal. In order to obtain an adequate dispersion, suitable emollients are selected for creating the dispersion, and proper processing techniques are used. Optical microscopy is one technique that helps to evaluate if the dispersion is satisfactory or not. When reviewing under the microscope, one should see a uniform representation of the dispersion as shown in image B below. Image A is a representation of a poorly made dispersion, a blotchy and non-uniform formula, and suggests that the zinc oxide particles are agglomerating.


Emollient Selection: Emollients are typically used for their aesthetic contribution to a formula; however, consideration must be given to attributes such as polarity. Untreated zinc oxide powders require high-polarity emollients to make uniform dispersions, and these should be added to the oil phase. High polarity emollients, such as cocoglycerides or dibutyl adipate, are great considerations for untreated zinc oxide. Additionally, untreated zinc oxide powders can be added to the water phase. Premixing the zinc oxide with a water-soluble emollient helps improve the dispersion and enables water phase incorporation.

Surface-treated zinc oxide powders allow for excellent dispersions with a wider range of emollients, depending on the coating. The more hydrophobic the coating, the lower the polarity of the emollient required to create a good dispersion.

Dispersing in Oil: Adding zinc oxide as the last ingredient in the oil phase while the oil phase is hot is recommended, as it allows for other solids to melt first. With this technique, the viscosity of the oil phase is low upon the addition of the zinc oxide. Follow by mixing well to wet the particles, displace the air pockets and homogenize the oil phase to optimize the dispersion. Properly homogenize during emulsification; the particles should not be visible to the naked eye and the consistency should appear like paint. It is best practice to “black-surface test” the final product to ensure uniformity and adequate dispersion.

For a successful hot pour, melt all solids in the oil phase, add ZnO and mix well to displace air pockets; homogenize until uniform and continuously mix until filling at close to optimal filling temperature.

Dispersing in Water: Dispersing in water can be considered for untreated zinc oxide powders. Premixing with a humectant or water-soluble emollient can improve dispersion. Following this step, we suggest mixing in water phase until uniform and conducting proper homogenization of the emulsion.

Additional Tips
A pH of 7.1 or greater is recommended. Below pH 7, divalent zinc ions will begin to form, and these ions will migrate to the water phase and cause instability in the formulation.
Keep in mind that Zn2+ can interact with rheology modifiers, film formers and emulsifiers. Using a coated material helps to minimize the ion migration. Acrylate-derived polymers are sensitive to Zn2+, as it forms

complexes leading to disruption of the polymer matrix and loss of stability. This effect is even more pronounced with the uncoated zinc oxide.

Using a chelating agent is helpful in the aqueous phase. Chelating agents such as disodium EDTA can help reduce the extent of these interactions, as they help bind some of the ions that may form in the formulation. During formulation the pH may rise. If necessary, when pH is higher than 7.5, use buffering agents (citric acid, lactic acid, or others), to lower the pH of the formula to no less than a pH of 7.1. Remember to check the pH at 0 hours and 24 hours and adjust as necessary before manufacturing. During stability testing the pH may rise, but this is a normal phenomenon and it should stop before the pH is too high. Pay attention, as the pH should not rise higher than 8.0.

Emulsifiers and Emulsion Structure: Zinc oxide can be readily incorporated into water-in-oil (W/O) or oil-in-water (O/W) emulsion systems. However, W/O emulsions are generally recommended when working with inorganic sunscreens. Usually, W/O emulsions provide better UV performance due to a more consistent film on the skin, but it is possible to achieve equally effective UV performance with O/W formulations. W/O emulsions give a heavier, more substantial feel, but also provide built-in water resistance in the formulation. The main advantage to W/O emulsions is that the pH is not of concern as oil is the external phase. They are optimal for a combination for zinc oxide and titanium dioxide. Good choices for nonionic emulsifiers for W/O emulsions include polyglyceryl-2 dipolyhydroxystearate and polyglyceryl-3 diisostearate.

O/W emulsions provide a lighter, more luxurious feel that is highly valued by the consumer. If water resistance is desired for an O/W formula, then a water-resistant polymer must be added to the formulation. When making an O/W emulsion, consider all formulation parameters. It is advised to use only nonionic emulsifiers and rheology modifiers in an O/W emulsion containing zinc oxide. We advise against using ionic emulsifiers, especially in O/W systems, as they might cause a shift in the pH (up or down) which can affect the stability of the formulation, impacting the cosmetic appeal and UV screening performance of the product. Some suggestions of nonionic emulsifiers for O/W systems are stearates, glucosides and oleates. It is recommended the formulation be a minimum pH of 7.1, using natural gums or nonionic thickeners. When it comes to density loading, at high loads of zinc oxide, the oil droplets become denser than the water phase, which causes agglomeration and settling of droplets. Therefore, it is recommended to increase the concentration of emulsifiers and rheology modifiers if this occurs.

Whether developing a water-in-oil or oil-in-water emulsion, it is imperative that steps are taken to ensure a proper dispersion is made. For any emulsion, the proper dispersion helps mitigate whitening, as well as improve efficacy, stability and aesthetic appeal of the final formulation.


Troubleshooting Tips
The following suggestions will help formulators identify what may be causing instability in their formulations. If zinc oxide settles at high temperatures, it is most likely due to either ingredient incompatibility or incompatibility among ingredients in the formula or not enough suspending agents in the formula. We recommended increasing the thickener or suspending agent in the formula if this is observed. If a cottage cheese-like appearance is observed, it is often caused by use of an acrylate-based thickener in the formula. It may not be noticeable if either the acrylate thickener or level of zinc oxide is low, but the formula will separate over time. The cottage cheese-like appearance can also be caused by incompatible ingredients.

Observation of the composition of other raw materials in the formulation is imperative, as other raw ingredients may not be 100% active (bioactives are one example), and may contain a thickener or another ingredient that may be incompatible with zinc oxide. If there is separation, this could be caused by emulsifier or thickener concentration and the formulator should consider changing the quantity of the emulsifier or thickener. If there is an increase in pH over time, this is usually an indication that an ionic emulsifier was used and is causing pH to increase. If the formulation is grainy in appearance, this is likely due to lack of proper dispersion, which may be caused by poor emollient choices. We suggest that the formulator inspect emollient choices to ensure a match in polarity. A grainy appearance may also indicate that there is a reaction between divalent zinc ions and dispersants.

It is possible to switch nano for non-nano zinc oxide in formulations. The formulator will need to consider the density difference between the two types of zinc oxide. Switching from a non-nano to a nano particle could be an easy one to one replacement. Replacing nano with non-nano requires a little more caution, as there could be settling problems in the formula due to heavier particles. For this type of switch, the formulator may want to consider an increase of rheology modifiers and emulsifiers.

Overall, when formulating with zinc oxide powder, it is advised that formulators use a coated zinc oxide, if possible. A coated material will minimize the ion migration and will allow the formulator more choices of non-polar emollients that can be used to create the dispersion. It is possible, of course, to use uncoated material, but extra precaution should be taken to mitigate ion migration. It is also recommended that formulators strongly consider water-in-oil emulsions when formulating with zinc oxide. With this type of formulation, there is no concern for controlling the pH.

More info:
Further information is available online at www.carecrations.basf.us or via email at beautycare-na@basf.com
Related Searches
Related Knowledge Center
Suggested For You 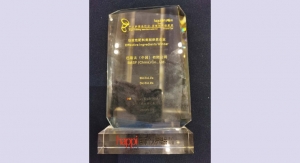