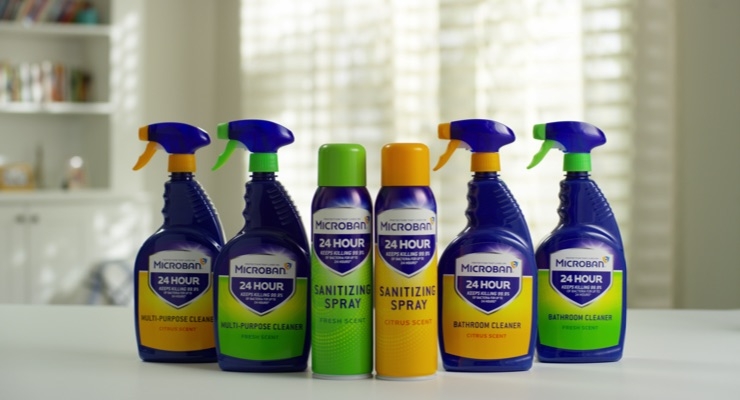 Tide. Olay. Gain. With widespread use among millions of consumers and prominent shelf space in major retailers across the globe, these are three of most valuable properties in the Procter & Gamble stable, and represent a small portion of the Cincinnati CPG firm’s billion dollar brands.

Now, P&G believes it has another one in the making with Microban 24.

This new home sanitizing product line, which officially debuts today, not only cleans surfaces by killing 99.9% of bacteria on contact, but it delivers antimicrobial protection for 24 hours. That’s the major point of differentiation P&G will promote as Microban 24 makes its way into the marketplace.

According to a recent survey conducted by The Harris Poll, 84% of Americans believe that their current household antibacterial products provide some level of lasting antibacterial protection beyond the moment of application. What they don’t know is that many disinfectants allow bacteria to be reintroduced to surfaces after being touched, according to P&G.

After a kitchen counter is wiped down with a regular cleaning product spray, consumers are quick to touch it again (and again, and again); they may place down a coffee mug, lunch box, or even their own hands—and that reintroduces bacteria. The surface may look clean, but that’s fleeting. Bacteria can survive on surfaces anywhere from several hours up to several days—and, under ideal conditions, bacteria can grow and multiply every 20 minutes.

In contrast, Microban 24’s formulation fends off that onslaught through a multi-layer shield (a proprietary polymer and quaternary ammonium technology) in which small amounts of ingredients are released over time, providing continuous antibac protection for up to 24 hours when used as directed, according to the company.

Microban 24 is launching with sanitizing spray, multi-purpose cleaner and a bathroom cleaner SKUs in two different scents (Fresh and Citrus).

Hitting the marketplace during cold and flu season in the US, not to mention worldwide concerns about Coronavirus, Microban24 seems to tap into the current zeitgeist, so to speak. Yet this launch was anything but hurried. P&G and its partner W.M. Barr in fact toiled away on this new formulation for nine years.

Part of that lengthy process included EPA registration, according to P&G and W.M. Barr officials who walked Happi through the brand’s key attributes ahead of the launch.

W.M. Barr has a 90-year history in anitmicrobial and disinfectant technology. It acquired the Microban business in 2012.

The Memphis, TN-based company contends that Microban has 60% B2C brand awareness. In fact, consumers may recognize the Microban name from a wide range of products from Spanx undergarments to Rubbermaid dish racks to baby diaper changing stations that are located in public bathrooms—they all incorporate Microban technology for antimicrobial protection.

The new partnership with W.M. Barr is part of P&G’s effort to leverage outside expertise to build its businesses through innovation in products and processes.

Today’s rollout also marks P&G’s first major home care launch since Febreze and Swiffer in the late 1990s. The launch will be backed by a national campaign, said officials.

A new innovation from a major player could help sway consumers away from store brands which have been gaining ground in homecare. According IRI, for the 52 weeks ended Sept. 8, 2019, all-purpose cleaner/disinfectant sales rose 4.7% to nearly $1.3 billion, with private label surging more than 35% during that time.

And, if Microban 24 fares as well as company officials believe it can,  P&G will enjoy a boost inthe all-purpose cleaner/disinfectant category, where it trails leaders Clorox, Colgate and RB.
Related Searches
Related Knowledge Center