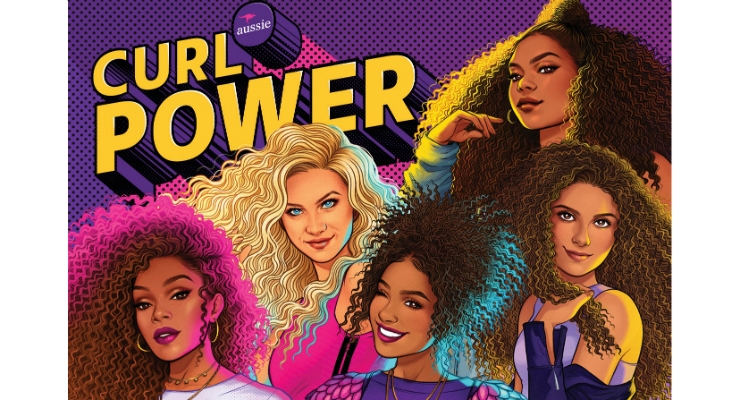 The SHERO campaign celebrates the natural, oft-overlooked curls and features girls that have embraced their unique curl power. Image courtesy of Business Wire.
08.06.19

Comic culture goes as far back as the 1930s, when comics were largely created by men, and the woman they illustrated were primarily portrayed from—and for—the male vantage. She was the damsel in distress; the seductress; the love object; the buxom babe with long, flowing hair and curves for days: all waiting for a hero. Together, Aussie and Bartel deconstruct the stereotypical expectations of women and girls in pop-culture, using comics as the gateway to a world in which girls and curls are a source of power and beauty.

“I have always been drawn to the stories of marginalized individuals and communities. In my career as a comic artist, I feel a responsibility to bring visibility to underrepresented groups and show them as positive, heroic and as so much more than their looks,” said Bartel. “The Aussie Curl Power campaign has been an incredible opportunity to illustrate the reality of girls with everyday challenges, who are channeling their innate powers to rise up and celebrate who they are. It is fiction, but still tangible and finally relatable to girls who have not grown up seeing their beauty—and especially not their beautiful, curly hair—spotlighted at all, let alone as a super power.”

Bartel herself is a super SHERO in the comic industry. As an illustrator thriving in a male-dominated and male-celebrated universe for years, Bartel is a pioneer whose own inner strength and determination built a career on positive depictions of female strength, power and natural beauty in comics. Decidedly absent from Bartel’s art is the highly-sexualized, archaic standards of traditional, female beauty. In their place is a new order of modern-day SHEROes rocking their natural texture and drawing on their curls as a source of power.

“We are so proud of our Curl Power partnership with Jen Bartel and its purpose of empowering curly girls everywhere to harness their own super powers and have fun with the natural texture of their hair,” said Lynn Hicks, brand manager, Aussie, P&G. “Heroines are among us in countless forms, ethnicities, sizes, and looks. As a mother of a curly girl, I believe that young girls deserve to see positive and powerful depictions of themselves being celebrated by beauty brands, in pop culture and in visual media.”

Aussie may be the first haircare brand to bring comics, super SHEROes and Curl Power to Beautycon LA on August 9-11, 2019. At Beautycon LA, the Aussie Curl Power experience includes an interactive street-art installation and an immersive indoor experience featuring a SHERO league of five influential young women as SHEROes of today. The girls transformed into SHEROes include:


Also available at Beautycon is the Aussie Miracle Curls Collection of 11 super products for curl moisture and protection that fight hair enemies like frizz and damage. In 2019, Aussie’s packaging and signature kangaroo received an uplift, while keeping the great formulas consumers know and love. New to the line are four new styling and defining products, including Miracle Curls Frizz Taming Cream, Defining Oil, Refresher and Mousse.