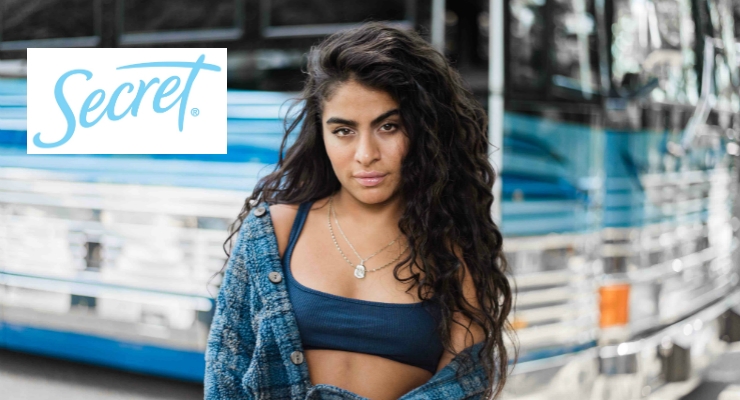 Grammy-nominee Jessie Reyez stars in the video for the campaign.
Happi Staff01.03.20

Secret Deodorant is debuting a new campaign starring a celebrity line-up of women across entertainment, sports, business and fitness. The goal of the campaign is to give air-time to the personal stories of modern women who are challenging the status quo in their respective fields.

With the release of its “All Strength, No Sweat” campaign, Secret Deodorant aims to shine a spotlight on inspirational women who are pursuing their passions without “sweating” the obstacles in their paths. The campaign video, which will air nationally through 2020, features a song written and performed by Grammy-nominee Jessie Reyez, who stars in the video. Also featured within the campaign are actress Camila Mendes, Olympic Gold Medalist Swin Cash, actress and entrepreneur Shenae Grimes-Beech and fitness influencer Ainsley Rodriguez.

A Song with a Message

The lyrics for the song were inspired by the brand’s “All Strength, No Sweat” platform from February 2019 and are meant to serve as a rallying cry for women of all kinds, encouraging them to take pride in their power, their attitude and their right to claim what they deserve in life.

“Secret has a history of supporting women’s progress and telling stories of women’s strength, which is something that I feel equally passionate about,” said Reyez. “As a woman in the music industry, I’ve experienced firsthand how difficult it can be to make headway in such a male-dominated field. I’m honored to be a part of this campaign and share Secret’s goal of equalizing opportunity for women everywhere. I hope our stories connect with other women out there and we can continue to inspire and lift up one another.”

Secret is also releasing a series of shorts featuring the perspectives and personal stories of each of the five women appearing in the campaign.

“We’re so proud to be working with such a diverse group of inspiring women, all of whom were chosen for their unwavering strength and relentless approach to getting what they want from life,” said Sara Saunders, associate brand director, Secret. “We hear from incredible women every day – about their concerns, their ambitions and about their work to earn their fair share at every stage and place in life. Our hope is that by spotlighting a few of these stories, we can continue to inspire strength and unity in making a real change together.”

Secret Deodorant, is committed to driving actions in support of equal representation, equal compensation and equal opportunity for all women; in December, it embarked on a month-long celebration of women-owned businesses, calling on shoppers to support “Women-Owned Wednesdays.”
Related Searches
Related Knowledge Center